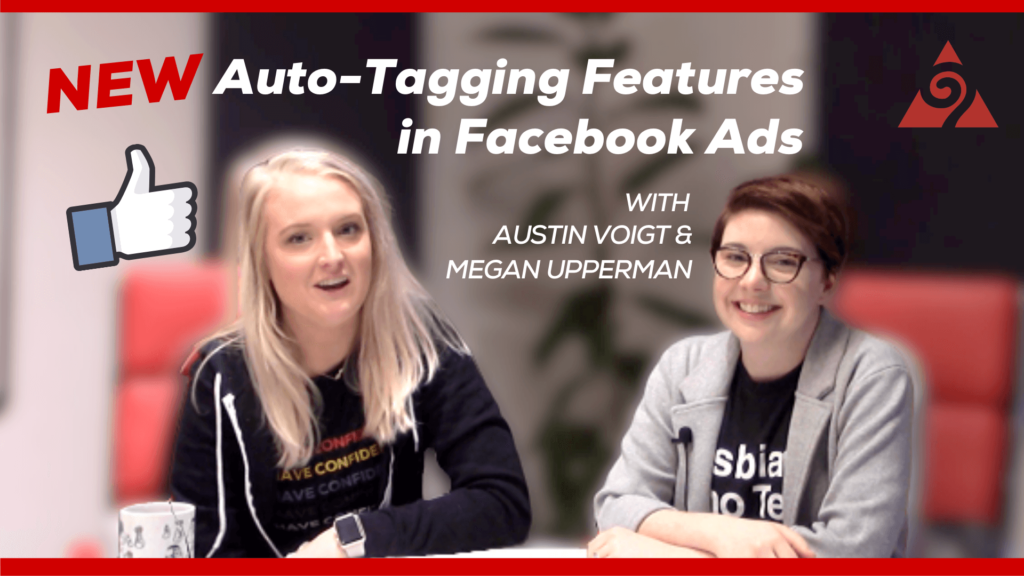 Tracking actions that users take on your website is a crucial piece of digital marketing.

In this video, Managers Austin Voigt and Megan Upperman discuss…

Or, reach out to an Augur today to talk about your digital marketing performance.

Austin: We were trying to install an on-click event for a button click on a client site, and we attempted to go through the GTM integration, Google Tag Manager, and when we got to that point, Facebook just led us directly into its platform that showed us different ideas for conversions to track on the site. It had a preview tool, it was nice and easy, and then I realized it had taken everything in-house and had its own tag management platform, essentially. You want to tell them about it?

Megan: Right. Even for those of us who do code, it’s really nice not to have to if you don’t need to.

Austin: In the past, you would have to crawl to your client’s site, and look at the source code and try to figure out if there was a unique piece of code that could signify an event that you want to track, like a button click, and then be able to integrate that with Facebook’s code, and then pass it back into the platform. It doesn’t take a brain surgeon or a site surgeon, but it does take a little bit of knowledge about code, and it looks like Facebook is now simply crawling the site for you and guiding you to different actions that things would be valuable, and placing that code for you without needing to use Google Tag Manager or any other systems. It’s all keeping it in-platform for you.

Megan: One of the interesting things about how that Facebook pixel works, is that it’s JavaScript-based, and for those of you who–

Austin: I didn’t know that.

Megan: Yes, so for those of you who know things about JavaScript, what that means is when it passes information through as part of the script, everything that it passes needs to already be defined, so that the whole script has to live together. Unlike a Tag Manager or something else where you can essentially take those little pieces and send that information one piece at a time, this Facebook script is really self-contained, so it has to stay all together.

Megan: Yes. There’s not a really good user-friendly way to hard code every event that you want to use.

Austin: In my view, as a digital marketer, this is making my life easier by allowing me to more quickly and easily track different conversions on my client site, and optimize their campaigns. It’s also making the process a little more foolproof and ensuring that I can debug things really easily and get things set up properly, but I’m sure there are a few other pros and cons?

Megan: There are. Yes, I think it means a little bit something different to everyone who’s going to use it. The good news is because it’s code-free and it’s so easy to use, a lot of different people are going to have their hands on it, which is nice. I would say for me, pros are obvious, it’s really easy to use. You don’t have to be able to code, and I agree with you. I think the new debugging features are really easy and really user-friendly, so you know for sure when something’s working or not. If it’s not, it’s really easy to find out why, which is a big improvement from the previous versions.

Austin: Yes, in the past, I’ve worked with site owners who did something as simple as changing the color of the submit button on their lead form, and all of a sudden, we lost all of our conversion data, because neither of us understood that that one simple change would throw all of that off, and then throw all of our thousands of dollars in campaigns off. This was many moons ago, but this situation would help us remedy that really quickly and just make sure that everything’s running smoothly, and then we’re not losing any time or money.

Megan: It’s true. There’s a bunch of really cool things that are great, but there’s a couple of cons, in my opinion, too. I think one thing is that it’s not customizable. All those events are templated, and that means you can only pull the data through that is templated and is static. If you are, for example, an e-commerce website, and part of the goal of your Facebook advertising program is that you really want to optimize for more people who are likely to spend more money on your site–

Megan: [laughs] I think that’s kind of rare, but whichever one–

Megan: [laughs] Whichever goal that you have, whether it’s small amounts or big amounts, you’re going to need that transaction title in order to optimize for that. One thing that you cannot get with the auto tag function is you can’t get those dynamic values to come through, so those pieces do have to be hardcoded. The good news, on the other hand, is that those hard-coded events, they do still play nicely with the auto tag features, so you can use a combination of both.

I think it’s got some really interesting impacts that I can see on the larger digital advertising industry. I think part of what’s fascinating for me is when they rolled out this feature, they completely removed the Google Tag Manager integration. It used to be, steps one, two, three, and Google Tag Manager publishes those tags that you need. They’ve completely removed that window in favor of their own auto-tagging platform.

Austin: I bet Google is mad.

Megan: Yes, I’m sure they are, because when you look at that, that to me signifies they’re taking these totally divergent paths now, where really, if one was to succeed, and the other was to fail, they’re preparing for that eventuality to take place.

Austin: I also think that as digital marketers, we’d see these sort of automation tools coming up all the time, and we usually try to take them with a grain of salt, simply because we know that these platforms always have ulterior motives. It’s not that they’re just trying to be nice and help the small businesses, it’s because they want your money or your data. What we like to do is test them out and see if the payoff outweighs the cost to ourselves and to our clients. I would say in this situation, the cost is just letting Facebook have a little bit more data, and the payoff is pretty significant in terms of making it easier to do your advertising and do it well.

Megan: My final word at the end of the day is that it is really easy to use. I love that it’s a code-free solution. The bummer is that it’s not customizable. I think realistically, this is probably the first of many other iterations that they’ll do, and I’m assuming they’ll incorporate a lot of really cool features.

Austin: Yes, I have a feeling, a couple of years down the road, it’ll turn into asking for our social security numbers, having you sign your soul away on a piece of paper. We might already be there and just not know it, but until then, we can continue vetting these tools and using them to improve businesses and our client’s performance and making our work more efficient. It’s really allowing advertisers to free up their time to spend it on strategy and thinking critically, and not worrying about the technical side of installing things like this.

Austin: Yes. We’ll keep you posted on the next iterations. Until then, keep your social security number private.