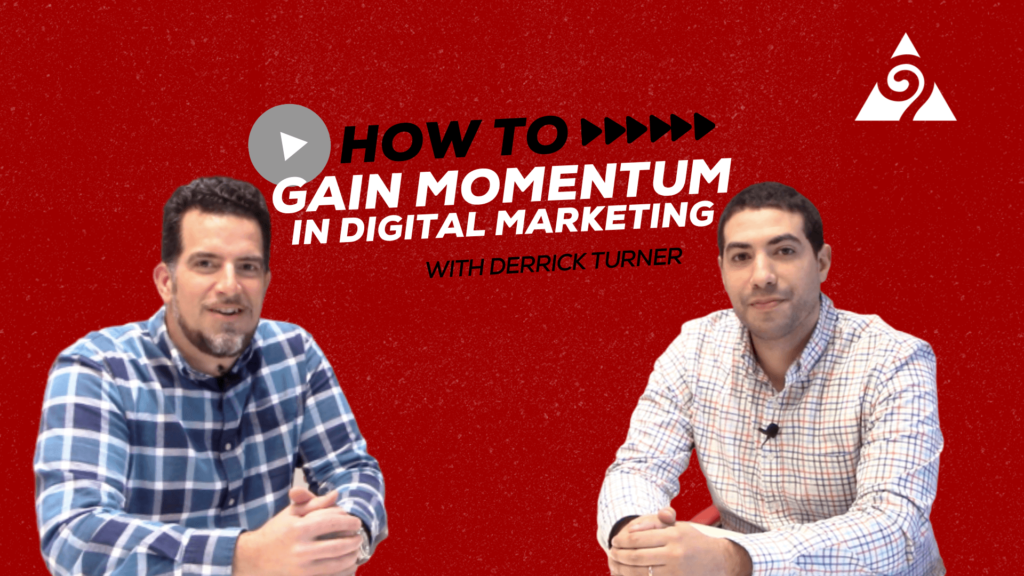 “Start by securing small wins.” In this video, Augurian’s Director of Services Derrick Turner offers insight into how marketing teams can gain momentum with their digital strategy.

Joined by Josh Becerra, he covers some of the essential elements for getting the ball rolling:

How to Gain Momentum in Digital Marketing

Or, reach out to an Augur today to talk about your digital marketing performance.

Josh Becerra: Hey, everybody, this is Josh Becerra from Augurian. I’m here with Derrick Turner, our director of services.

Josh: One of the things that we’re privy to because we are working with so many clients, is how teams work together. I think one of the challenges sometimes is gaining momentum or getting momentum with a team, with a marketing team. You obviously have a lot of experience and a line of sight into what works and what doesn’t. What would you say are some of the top things that help teams get momentum?

Derrick: Sure, yes. At the highest level, I think, ultimately, it just boils down to finding a way to get some wins. There’s a lot of different situations that teams, especially in corporate settings, are going to find themselves in that may make that difficult, but really trying to focus on, “All right, what is, at the end of the day, something that we can do?” Because marketing is not a passive thing, it’s an action thing, so, “Where are the things that we can do that are going to start to make us smarter tomorrow?”

At the highest level, Josh, I think really being able to articulate wins across the organization, that goes such a long way, just in terms of feeling like your efforts are paying off in the grander scheme of what your organization needs. Ultimately, being able to measure ROI is great. In lieu of that- and there is a lot of reasons why you might not be able to do that today- finding smaller things that might not even tie back to revenue, but just show that, yes, we are doing better today than we were yesterday.

Josh: Yes. That’s exactly what I was thinking in my head right now, is it doesn’t have to be this huge win, we just need are to demonstrate, “Hey, we’re getting some traction here. This is actually working.” It doesn’t have to be like, “Wow, we just got hundreds of percentage increase on some ROI.” No, “We launched something, we’re seeing that it’s working.” You need to celebrate the little baby steps that you’re taking, right?

Derrick: Yes. Even if it doesn’t solve your full-on problem in terms of what you’re trying to accomplish there, even just getting a little bit of information back of like, “That did initiate change, that validates the hypothesis, the working hypothesis we have” goes a really long way. As far as things that get in the way pretty often, just having those little bits of insights I think can go a long way. Culture, I think, at a lot of places.

They are in a very mature situation as far as their business, they’ve got a whole bunch of processes that have been validated for years, if not decades. Trying to bring up an idea that might not be fully bedded, might not have the entire solution quite figured out can be a real challenge in those situations to overall get a buy-in. But if you’re able to reduce it back and really explain to people that the risk here is pretty minimal, the scope here is pretty low, and this is going to give us some of the things that we need to really put together a more robust justification for growing this can be transformational.

Josh: Besides culture, what other barriers have you seen in organizations that you feel like keep teams from feeling like there’s momentum behind what they’re working on?

Derrick: Yes, that’s a great question. I’d say, ultimately, there’s a bunch of different things that all lead up into culture. One of the high-level things is just perfect being the enemy of better. In a lot of cases, even just looking for that 5 or 10% lift on something can get hung up because you’ll get questions like, “Well, how is this going to look in the far future?” in terms of answering these high-level questions. The answer can be, “I don’t know” a lot of times. If the scope is low enough and you can make that case, that is one way to get over it.

The other thing, I would say, is trust. Just having trust in your teammates that, “Okay, we’re going to try something, and it might fail, but we’ve talked about this and we’re all on the same page in terms of this is an acceptable risk and the scope is low enough.” Not necessarily feeling like you’re going to be a bad guy on the team in the organization if something doesn’t quite work out perfectly, I think, is a really big component to just being able to feel safe and take action.

I think, in a lot of situations, if you find yourself in a situation where you just don’t necessarily feel like there’s momentum where there should be opportunity, really taking stock and being vulnerable with yourself about the situation you’re in and the company is in, as far as the culture goes, and being candid with your leadership, with your manager about that and trying to start that conversation. It doesn’t happen overnight, but I think, high level, that is probably the most important thing.

The other thing is I think really just focus on step one, don’t worry about step two, three, or one hundred. Really just focus on step one and attack it, and just make sure that things are ultimately getting done and, at the end of the day, we’re not just necessarily sitting in meetings or talking about this high-level perfect plan, which might not ever come into fruition.

Josh: Yes, and celebrate those little wins along the way. All right, well, that’s it. I really appreciate it, Derrick. Thanks so much. Hopefully, you’ve learned something and you can build some momentum with your marketing teams. See you.