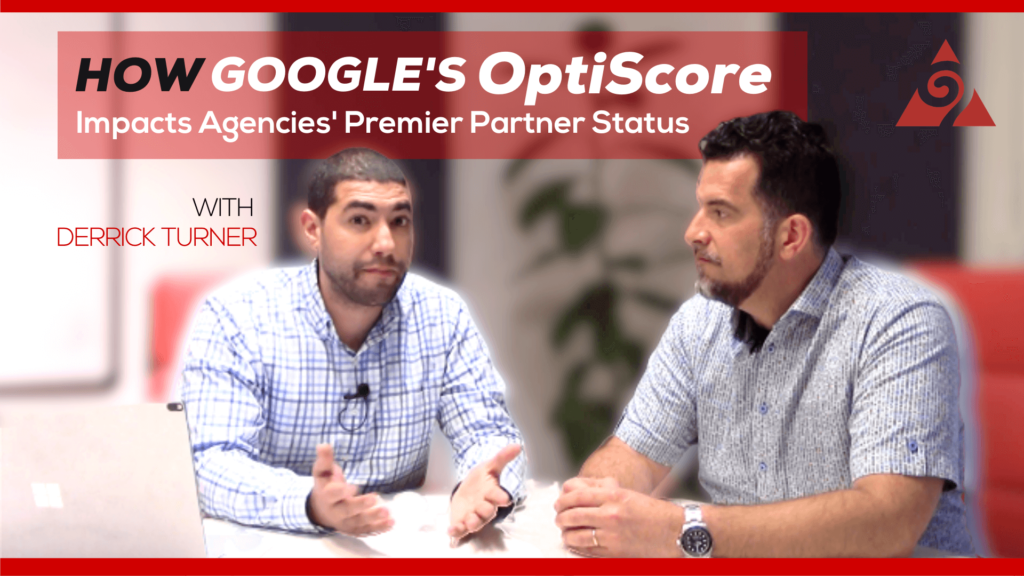 Google’s OptiScore, released in 2019, grades advertisers’ accounts on how well they adhere to Google-dictated “best practices.”

In this video, Director of Services Derrick Turner talks about how the OptiScore will impact agencies’ Premier Partner status – and the implications this change will have on advertisers’ account performance.

Josh Becerra: Hi, everybody, this is Josh Becerra from Augurian. I’m here with Derrick Turner, our Director of services, we’re going to be talking a little bit about the Google Partner Program and how it’s changing.

Augurian, we’re a premier partner, which is a great status. There aren’t many agencies that actually achieved that level, but things are changing with the Google Partner Program.

Why don’t you tell us a little bit about that?

Derrick Turner: Thanks, Josh. Yes, there are a few important changes that are going to happen with the upcoming rollout of the new Google Partner Program. A few ones probably won’t be that big of a deal for many agencies and one likely will. One is that the spend requirements are going up. They’re essentially doubling. This will obviously limit some agencies access to be a Google Partner, but in the grand scheme of things, it isn’t a huge increase. Probably not the biggest deal there as far as impact and another change that’s happening is that the user certifications required to maintain eligibility for the program has gone up. In the past really you only need one person or agency that had a particular certification to maintain your status. Now Google is saying they want 50% of your users in your MCC, which is essentially where all the ad accounts are housed to have that certification.

Josh: This isn’t necessarily a bad thing. I think that is really looking out for end users. Agencies should be qualified to work with them right?

Derrick: Yes, I don’t see this as harmful. It will be a little bit more administrative time on the agency side, but in general your team should be trained up as far as current best practices. Not a very big deal there. The last one, however, is essentially changing from requiring that agencies are driving performance for clients. The articulation is now that Google is going to be essentially monitoring something that they call OptiScore which is more or less a tab with a powered recommendations for changes in the account. The big part about this is they’re saying you have to essentially accept these changes in order to qualify and that simply dismissing them will not make you eligible.

Josh: If I want our agency to continue to be a Premier Partner, we actually have to take some of the recommendations from this AI engine?

Derrick: You have to accept some of Google’s recommendations.

Josh: Well, that’s problematic. I know that there’s some buzz in some of the forums about that. Why don’t you talk a little bit about why that’s so contentious?

Derrick: Sure. I think in general, it puts the agency’s partners in a position of not necessarily feeling like they are truly agnostic to the publishers which I think most good multi-channel agencies are, they want to spend the next best dollar. Overall, OptiScore is a good thing. It is automating a lot of the routine work that people traditionally had to do that took up time, you were spending time in Excel spreadsheets, essentially making calculations. The vast majority of the OptiScore recommendations are helpful and I think people should be taking advantage of them on the agency side as a way to save time. That being said, you do really have to critically think about what you are accepting, and not being diligent or not necessarily understanding what you’re accepted can have some pretty big impacts on your account.

Josh: I think it’s the fact that you’re obligated to do it. Where like, the real rub is, I would say. Not that it’s a bad tool. Not that isn’t going to be helpful in a lot of ways. It’s just when you’re looking at accounts or a campaign, you really want to make sure that you’re spending that next best dollar. Yes, for sure.

Derrick: There’s a lot to be seen. The extent and the actual requirements as far as the accepted recommendations, I haven’t heard any information on that quite yet. I know that there’s just bugs out there working with the system, so I’m sure they’ll be more articulation and it might not overall be that bad, but I think the real concern is for people who are out there that might be using this, you have to understand that Google is only able to make recommendations for spending in Google.

Derrick: That’s not necessarily where your next best dollar is spent. It could be another major publishers, Facebook, Instagram, Microsoft Ads, LinkedIn, who knows, and our agency really prides itself on being able to run the analysis. We are also adopting automation. too. It’s automation that is able to look across those publishers and isn’t self-interested.

Josh: What does this mean for the long term, would you say?

Derrick: Overall, as far as the Google Partner Program, there’s just simply going to be a few less Google Partners. Google is really asking agencies to embrace automation, which I think overall is a good thing, but it’s in Google’s own unique way. What I think this is ultimately going to do is continue in line with the updated school I made that is really driving inflation within their system. A few years back, they reduced the amount of ads that were you’re able to essentially qualify and have shown. There used to be 11. It’s now a reduced number. Now,— mobile has really reduced the inventory. The same money growing money is going after reduced space. Another update that they did was a close match variant. That’s essentially saying, if your keyword’s close, even if you’re trying to tell us a little bit on exactly this, we’re still going to take some discretion and expand that targeting a little bit based on what we think is good. This is really a benefit for advertisers who weren’t quite as diligent as far as their research. It also has the impact of basically more money chasing after the same keyword inside advertisers who had done their due diligence and found those keywords. Now, everybody just shows-

Josh: Leveling the playing field in a way.

Derrick: It is, but at the same time for people who had invested and were previously winning their CPCs are going to go up. In addition to this, Google is depending on how this actually rolls out, are they recommending budget changes, CPC changes that are constantly inflating. So far, I haven’t seen a huge problem with this, but I think long term, they’ll continue to tweak it, it will continue to change and if they are requiring that people accept changes that raise bids, you can expect inflation for terms that were previously more profitable.

Josh: I think, all in all, this OptiScore thing is out there. We’re trying to figure out exactly what it’s going to look like for Google Partners status. As an agency, we just need to really make sure that we’re keeping the best interest of our clients in mind over the best interests of the publishers wouldn’t you say?

Derrick: It’ll be really interesting to see how this impacts Google. I know they’ve definitely gone ahead with this direction. It’s in contrast to what I’ve seen from one of their major competitors. Microsoft. Microsoft’s really been helping our advertisers find ways to win for clients in a way that is really starting to differentiate themselves and I think it will probably benefit their bottom line over the next coming years, but we’ll see.

Josh: Okay, well, great. Well, thanks, Derrick, for the perspective, we’re going to continue to pay attention to it and hopefully, it’ll all work out for both clients, agencies and for publishers.