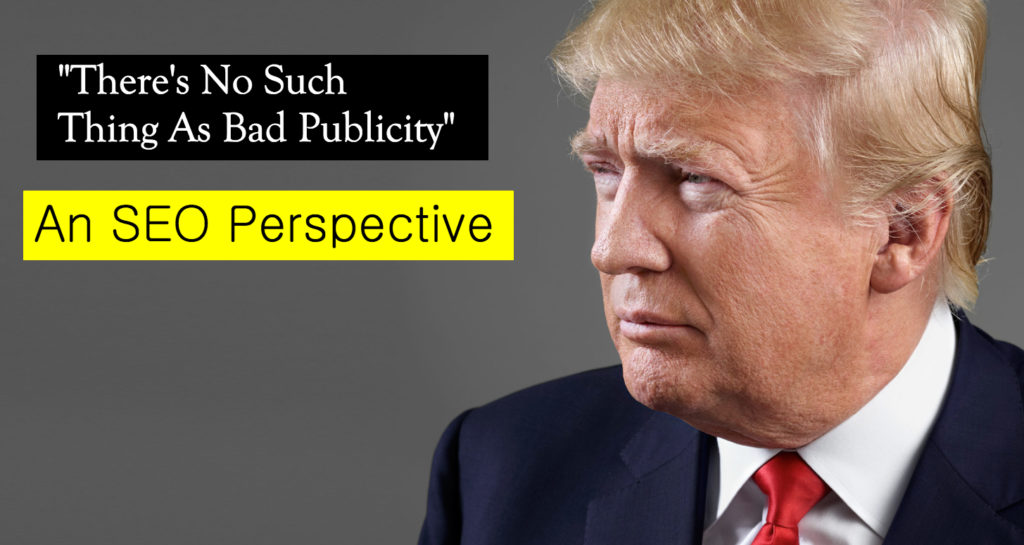 Throughout the 2016 election, Donald Trump dominated the news cycle. Whether intentional or not, many – including statistics blog 538 have speculated that his often controversial remarks led to more press, eventually helping him to become President of The United States.

In April, Columbia Journal Review published that “Trump Killed The News Cycle“, completely changing how news and PR are perceived. His “off-the-cuff” style of saying (and often tweeting) whatever comes to mind led to frequent criticism and bad publicity, but he ultimately still prevailed despite (or because?) of it.

We wanted to take this theory into our realm, and ask the question: Does Bad Publicity Help or Hurt SEO?

We analyzed 5 major corporate PR nightmares of the past couple years, and the resulting positional changes and traffic estimations from SEMRush.

On April 9, 2017, a video was released showing a passenger physically removed from a United flight despite having a ticket. They claimed the flight was overbooked, and the passenger was visibly upset and eventually dragged when he wouldn’t comply. United issued a statement that essentially blamed the passenger, which, alongside the horrific video made the event go viral.

The graph below shows estimated traffic to united.com. We actually see a slight spike for the month of April, when the event took place. This was an increase of about 600,000 visitors, or about 9% month over month. The traffic was not fully sustained in months after, meaning the spike was at least partially the result of the controversy surrounding the incident.

Uber had no shortage of bad press in 2017. Overall, their SEO appeared to improve slightly before the bad PR started happening and has remained mostly flat during all of the scandals.

This graph may be inconclusive either way since Uber has been trending upward for a while now anyway. It will be interesting to see how rankings and traffic are affected if the bad press continues to pour in, but thus far it does not to appear to have changed much.

Wells Fargo was involved in a scandal over assertions that employees were encouraged to open fake accounts without customers’ authorizations. This timeline was very spread out as lawsuits eventually came out, as well as recent news that there were more fake accounts than originally reported.

Interestingly, their website seems to have maintained, or even slightly improved their SEO during this timeline. Though it looks like a small spike, as you can see on the graph this was actually an increase of about 3 million monthly visitors. Part of this increase was also due to a higher paid search budget (The orange line in the graph below).

This was likely a strategy they introduced for reputation management, taking up more real estate on the SERP for queries such as “Wells Fargo Fake Accounts”. This is a good example of using a combined SEO/SEM strategy successfully.

In September 2015, Volkswagen admitted to cheating on emissions test numbers. Their forged numbers caused diesel vehicles to seem cleaner than they really were, and public backlash ensued.

Since this scandal happened about 2 years ago, we have some decent historical data to look at for traffic numbers. And surprisingly, SEMRush estimates that traffic to vw.com has seen steady increases since the scandal. In fact, they are getting about 500,000 more monthly visitors now than they were at the start of the negative news stories. Of course, this is an estimation and there are likely other factors in play, but that is still substantial.

Pepsi drew criticism from both sides for an ad featuring Kendall Jenner. As Wired reported, …”it was so bad it united the internet“. Based on the SEMRush report, pepsi.com was unlike the other cases in that it actually lost ground during and after the incident. This was a smaller number of monthly visitors lost (about 15,000) but still a substantial percentage change (about -18%).

On an unrelated note, the giant spike in paid traffic (orange) was when Pepsi was taking the aspartame out of their diet soda, and they were bidding on broad matched terms like aspartame, causing a huge (but likely costly) influx of traffic.

Overall, the results are not overly convincing in either direction. Of the 5 PR nightmares we analyzed, 3 saw increased traffic during and after the scandal, 1 remained flat, and 1 decreased.

However, this does go against what many would assume: that bad PR would eventually hurt SEO in most cases. The likely reasoning for this is because search engines may not be weighing sentiment as highly as sheer volume. Meaning, as long as you are getting lots of backlinks and appearing in news, it may not always matter whether it is positive or negative.

What lessons can businesses learn from this?

I’m not sure that the takeaway is to intentionally stir up negative press to get more links and traffic. Especially considering that algorithms such as Google’s are always changing and could start to weigh sentiment more highly (not to mention other business implications). However, the results may suggest that, at least for now, companies should put more importance on the volume of their content, and not worry as much about the public perception right away. (Think of the spaghetti method: throw stuff against the wall and see what sticks).

A good example of this method is Wendy’s twitter account. Wendy’s has been recently using a strategy of replying to mentions of competitor brands with sassy, sometimes even insulting tweets. The tweets began going viral and have resulted in a ton of press, both positive and negative (and a large boost in traffic as well). Perhaps years ago, this strategy would have been seen as too risky to the brand image, but in 2017, taking more chances with content seems to be paying off, at least for some.