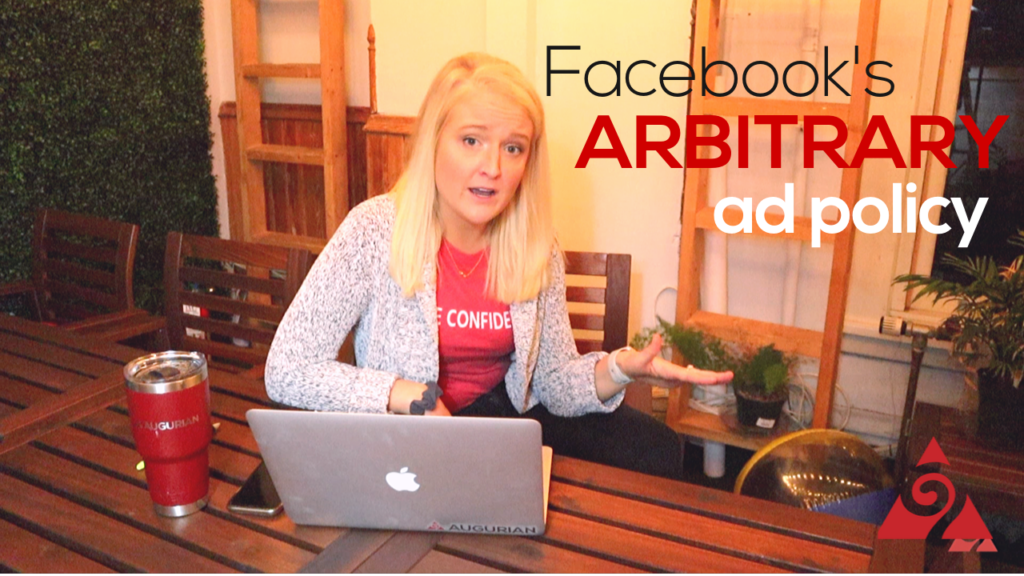 With all of the discussion happening around Facebook and the role it plays in our political landscape, have you ever wondered what goes on behind the scenes with Facebook’s political ads policy?

We’ll give you a look at what precisely those digital ad policies say – and how they disproportionately affect advertisers depending on what (or who) they’re trying to sell you.

Everybody, calm down. We made up some words, put them on a page, and you can refer to that if you have any issues with Russia interfering with our political elections. With all of the recent discussion happening around Facebook and its role in the political landscape, have you ever wondered what goes on behind the scenes with its advertising policies? I’m Austin Voigt, manager of Paid Media at Augurian. In this episode of Augur Insights, we’ll take you behind the scenes to show you exactly what Facebook’s arbitrary ad policies say and how they can disproportionately affect different advertisers, depending on who, or what they’re selling you.

If you’re a digital marketer, you may have recently seen something called Special Ad Categories. At first, we thought maybe we’d be getting some new special type of targeting options. A limited targeting option. It’s actually a new set of restrictions aimed at curbing unlawful and discriminatory practices in Facebook’s ad platform. Specifically, it applies to credit, housing, employment, and other related industries. While some of these new ad policies can be a little bit frustrating, it makes sense. It would also make sense that all of Facebook’s advertising policies should apply to any advertiser on the platform, right?

Just the other week, Facebook was actually thinning out its advertising policies in order to accommodate some of the practices that have been found in the political sphere. If you take a look at Facebook’s advertising policies on their site, you’ll find the discriminatory practices that we just talked about, controversial content, and misinformation. Until recently, the misinformation policy read very differently. It actually included this little statement. Some of you may have heard of Judd Legum, an American journalist, political staffer and the creator of the Popular Information newsletter. He recently placed an inquiry with Facebook asking them about their policy changes.

We got a response back from Facebook stating that political ads are unable to be fact-checked. That seems a little odd. What’s even more odd is the timing of this quiet policy change. Immediately after it happened, a certain political figure, who shall not be named, decided to increase their Facebook advertising, spending by $1.2 million. Another politician was also recently seen taking news articles, sharing the links in Facebook ads with slightly edited headlines in text. Especially in the wake of Russia’s interference in the 2016 presidential elections, specifically utilizing Facebook advertising, there’s been a lot of controversy surrounding the platform.

Facebook decided to be proactive. On the website, you can find a set of guidelines Facebook has posted for ads about social issues, elections, and politics. These guidelines, basically, say, “We’re currently working on an authorization process, which is gradually rolling out in some countries.” In other words, “Everybody, calm down. We made up some words and we put them on a page on the site and you can refer to that if you have any issues with Russia interfering our political elections.” Is it a little bit sad? Yes. Immoral? Maybe. But is it illegal? No. Currently, in the United States, there is no federal regulation enforcing truth in political advertising.

As of 2014, 27 different states in our country have tried to enforce regulations around truth in political advertising. However, more often than not they’re curbed in court by the First Amendment. Can’t lying politicians do just as much harm to our country as a lying business? Is it the job of media businesses like Facebook to step up saying no to the millions of dollars of revenue and prevent these politicians from advertising on their platforms when they’re being untruthful? Does it come down to us, the consumers, to say no with our wallets and our actions? Would that even make a difference at this point? It’s unfortunate that these practices disproportionately affect some and not all.

Small businesses are now suffering the consequences of these enhanced policies, and politicians essentially now have free reign. Many would argue in fact that, the large corporations supporting those politicians are actually disproportionately benefiting from this free reign. Social media and the digital landscape at large, are still very young. The rules and regulations are still largely undetermined, partially because our lawmakers don’t fully understand how they operate and partially because they change every single day. Until Facebook’s arbitrary ad policies are more clearly defined, if they ever are, it can feel like everyone’s for themselves.

However, our motto at Augurian is to do our research, have confidence in the work that we do and be prepared for the inevitable change that will happen on these platforms every day. You’re not alone out there and we can help. Are Facebook’s new advertising policies affecting your business? Maybe they are, and you don’t even know it. What do you think the future of these platforms will look like? Let us know. Make sure you subscribe so you don’t miss out when we publish new content.