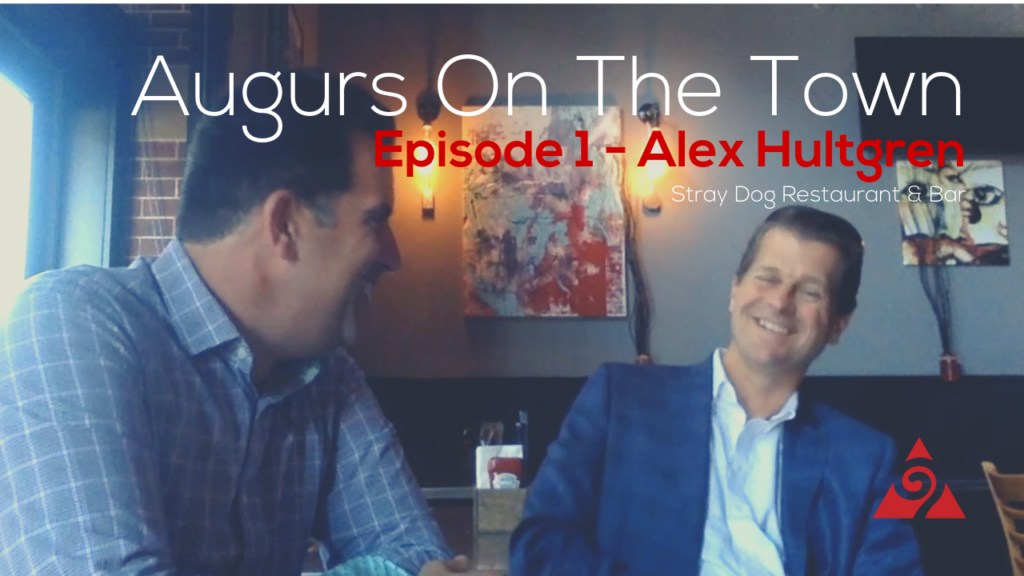 Introducing Augurs On The Town, a new series of videos where Augurian team members have conversations with other local digital marketers and thought leaders, while hanging out at bars, breweries and venues throughout the Twin Cities.

In Episode #1 of Augurs On The Town – Join Josh at The Stray Dog Restaurant and Bar in NE Minneapolis as he talks with Alex Hultgren, from Customers 1st Marketing, about his recent blog post: “All Marketing is Sales: 5 Lessons All Brand Marketers Must Remember”.

Josh: Hey, everybody this is Josh from Augurian. I’m here with Alex Hultgren. We’re sitting at The Stray Dog here on the corner of 4th and Hennepin, they’ve been nice enough to let us use their back room so come have a beer at The Stray dog. Alex has a pretty amazing pedigree, he’s a former Director of Communications and Social Media Manager for Ford Europe, you were a National Digital Manager for the Customer Service Division of Ford here in the US, director of marketing Polaris with Victory Motorcycles.

You’re with Haworth VP of Marketing over there where what I understand is you helped with product launches into all the Walmarts both in-store but also online. I read a blog post of yours, I think on LinkedIn, actually, called All Marketing is Sales: Five lessons all brand marketers must remember. I thought we could maybe talk through some of those things that you highlighted.

Alex: Yes, absolutely. I’ve seen a lot of circumstances where brands of various sizes will come up with a great branding campaign which sometimes the methods are a little unclear, what the actual objective is a little unclear and ultimately not everything you do has to be a direct response by selling something today. If the money you’re putting into your brand even if it’s an awareness campaign isn’t one that’ll eventually lead someone down the path to buy your product, it’s not money well spent.

You guys remember the Pepsi Refresh Project on social media, they put a lot of money into people coming up with ideas for local organizations to– Pepsi was going to invest in a lot of communities, it generated a lot of brand love but when they went back and looked at all the data it didn’t actually sell any Pepsi. It’s great if someone loves the brand but ultimately, if that money can be spent on something that will be driving your sales eventually, it’s probably money well spent.

Josh: You should be able to do both, right? It’s not like an either/or, you either build awareness and love for the brand or you drive sales. There should be kind of this sticky piece that you can find in the middle where not only are people like, “That’s really cool,” but it’s also like, “That’s so cool I’m going to go buy it”.

Alex: Absolutely. At the end of the day, the purchase decision is still an emotional decision. Most people will make an emotional decision then they’ll use all the facts and figures and logic to reinforce and validate what they just did, but ultimately you’ve got to connect on an emotional level. Don’t misunderstand, branding work and awareness work is very critical, you need to be making an emotional reaction from your customer in your work because if you’re not, then it falls flat. We’ve both seen a lot of advertising out there that you go, “What was that?” Or it just doesn’t seem to be effective so it didn’t move you to buy it.

Josh: Yes, or it’s so cool but at the end of the day it’s like, “What brand was that? I don’t even recognize who put that out there,” and I feel like that ties into one of the other tenants of these five things that you were talking about which if people don’t know it’s from you then you’re wasting your money.

Alex: Yes. Well, it’s again one of those things where– The example from Europe too is that there was a Facebook campaign in one of the countries in Europe part as well. It was about highlighting new artists which is a really cool opportunity but they didn’t want a brand it, they just wanted to call it Bands In Transit because Transit is the name of the car or the van we have. Particular like in the UK, if you were a band in the 70s or the 80s, if you had a Ford Transit you were the [crosstalk] I would say.

Josh: You were you are a high-class band.

Alex: Exactly, you gigged at all the schools, all the colleges, all the pubs, that was a thing to go for. It was a really cool campaign there, the challenge was they didn’t have any branding at all on Facebook so it wasn’t it all clear other than the fact that there was a transit van in it, that Ford was paying for the content. In terms of wanting to put content out there that was going to really attract a younger consumer that would really value it, it’s a fantastic idea. The fact that then they just dropped the ball and didn’t actually carry it forward.

Josh: Right at the end.

Alex: Exactly. This day and age everyone wants everything for free but most people also know someone’s got to pay for this stuff. To not get credit for what you’re doing is just not a good use of your money.

Josh: Yes, sure, which also ties into this idea of having some sort of a call to action. This was another one of the tenants that I thought was really interesting and I’ve seen like when we’ve taken over campaigns and accounts where we get a lot of the biggest wins is when we’re pitching conversion rate optimization and saying, “Let’s think about what is that meaningful thing that we’re asking a website visitor to do. What is that conversion point? Is that really what their first next step should be?” We question that. That’s where sometimes we see some of our biggest wins, is when we’re thinking about calls to action. I would argue that just putting it at the end like, “This is brought to you by Ford”, is in a way a very subtle call to action, or at least it’s making an association. Talk a little bit about this idea of concluding with a call to action.

Alex: Yes, absolutely. For example, when I was in Ford’s Customer Service Division, it’s been a couple of years ago now, but we were just getting into the world of creating content. We were trying to figure out, “What’s relevant for Ford to be talking about?” We can’t do something on, “Why these windows are better for Ford than somebody else?” It wouldn’t be authentic for us, but things like winter driving tips or things of that nature.

If you’ve got a video call two minutes long with three or four interesting tips, at the end of the video, to not give the consumer a chance to find out about summer beach vacation driving, something like that or something that’s still related content, that’s still relevant for you to talk about. To take it deeper, if it’s winter driving tips for example. If it’s time for new snow tires, “Click here to find out more information.” It’s to always give the consumer the chance to either consume more of that type of content and stay relevant because you’ve got their attention.

To just end the video and just let them go away just seems like such a lost opportunity, so either give them more of the same kind of content or drive them further down the funnel because if something in that article was relevant to them, it’s like, “I probably do need new snow tires. Look, they’ve got them right here. I can find out more.”

Alex: My pleasure Josh, thank you.

Josh: I really appreciate it and we’re off for today. Pounds.